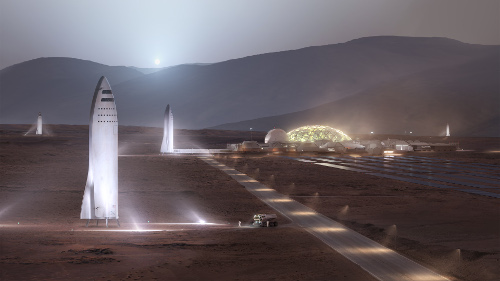 There is a growing groundswell of thoughts, desires, hopes and aspirations to reach out to the red planet. Not just “boots on the ground”, but to take the human race to a new level, to be truly multiplanetary, spreading our civilisation to Mars.

Elon Musk is the most influential advocate of this. In fact, he isn’t just an advocate. He founded a company, SpaceX, with this as it’s goal. Along the way, reducing the cost of access to space, building reusable spacecraft, and eventually, laying the foundations for a colony on Mars.

Here is his presentation at the International Astronautical Congress (IAC) in Adelaide, Australia earlier this year.

For most people, the suggestion that someone could drive this forward, as a private enterprise, outside of some government organisation such as NASA, would be ridiculed. But if someone can, then it is probably Elon Musk.

Take a read and decide for yourself.

Regardless of whether this proves to be a success in kick starting a Mars colony, SpaceX has already proved reuse of first stage Falcon 9 rockets with the aptly named “hover slam” method of landing. The coming twelve months will see the introduction of block 5 engines, which are intended to allow Falcon 9 rockets to be reused up to ten times before any significant refurbishment.

The Falcon 9 already provides a lower launch price than any alternative launch providers, but with no current competition to push their prices down, and a mission to Mars to fund, there are unlikely to be any massive reductions in price from SpaceX for a while.

And now the technique has been flight proven, the competitors are beginning to chase the same goal.