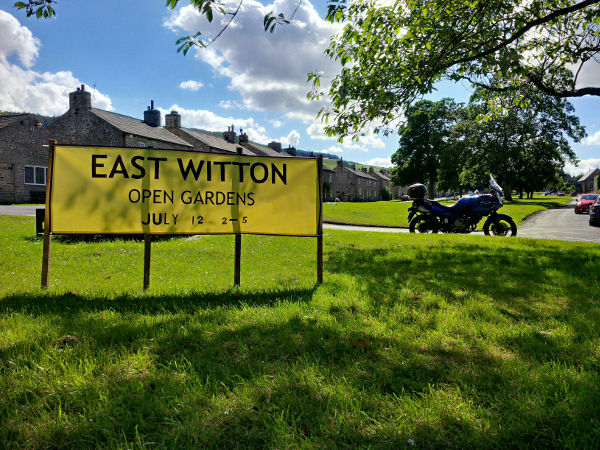 It’s been a while. Ages is how it feels. Though I have had short ride outs locally, I like to explore different and new places, it’s a kind of wanderlust I think, preferably trips without a destination in mind, just follow my nose, my gut, and see where I end up.

I prefer small roads. B roads. With lots of bends, what biker doesn’t want to find nice sweeping bends, cranked over close to the edge. And who knows what wonderful places you might find.

Today was just such a day.

After a brief stop of in Middlesbrough city centre, I had a half hour ride, down dual carriageways, which is more of a slog than anything else, though being stuck in your helmet, riding mostly on auto pilot, the mind wanders through various stuff, processing things.

A stop off and wander around historic Ripon, before heading out proper, into the Nidderdale, on the edge of the Yorkshire Dales.

The road out of Ripon, towards Pateley Bridge, takes you past Fountains Abbey. I didn’t stop, as I have been a few times before, but is well worth a look if you are out that way and don’t mind paying the National Trust entrance fee. The B6265 is a meandering road, lots of curves, blind corners and few places for safe overtaking.

Pateley Bridge itself is about 10 miles from Ripon, and is down at the bottom of a valley. It looked quite a quaint little town and a bit of a tourist trap too, so I rode straight through, then hung a right at the local petrol station, towards Gouthewaite Reservoir.

This is where the roads got narrow and technical. Mainly single track. I wasmeandering, with no real plan, exactly what I needed.

I grew up riding this sort of road in Cornwall, constantly up and down the gears, optimising road position for visibility and manoeuvrability on blind corners, and every so often you come across some really beautiful views. And some lovely cottages and houses too. Some time later, well past the reservoir and amongst a cluster of houses, I spotted a sign to the right, very steep hill, no buses or goods vehicles. Perfect! I think it was called Trapping Hill.

I peeled off the main road, such as it was, wound between some houses and started the ascent. Visibility was mainly good, giving me a chance to wind the bike on and throw it into and through a number of bends, some sweeping, some deceptively sharp. Perhaps not surprisingly, I passed a handful of bikes coming the other way, downhill, though I believe I had more fun going upwards. My ears popped towards the top, an acknowledgement of how high the climb had been.

Over a cattle grid and then meandering across the top of the moors. I am extra alert and watchful after passing over these grids, as it generally means cattle, often sheep, are wandering freely and they can be unpredictable. Up and down, sweeping through bends, slowing to squeeze past the occasional oncoming traffic, then down another steep hill and skirting round the edges of another reservoir.

There was a beautiful little village not long after, though I was having too much fun to stop.

And then it was over. Kind of. The small single track lane ended at a T junction, just outside Masham on the A6108. I decided to take a left, still wandering. Wow, this was a popular road with other bikers. It’s been a while since I saw that many bikes out. It was fun too, lovely sweeping bends, less technical than the single track stuff, but keeping you constantly on your toes. Somewhere around here are signs for Forbidden Corner, which though it sounds appropriate for the road, it is actually a garden open to the public. I stopped for 5 minutes at a tiny village called East Witton, for a smoke and a drink. Then back on the road and my first Oooo-Errr moment of the day. After a long straight, I came over an ancient bridge across the River Cover and there is a sudden drop and left hand bend not visible on the approach (to be fair, there is ample signage warning of a sharp left too). A sharp intake of breath and hard braking was needed to get round. I don’t think the bend would be so bad, if it wasn’t for the drop downwards, as you have less grip as you exit the bridge. Last year, when the Tour de France was coming through Yorkshire, a friend had described this place and was asking advice on the best place to get photos of the riders. I didn’t realise this was the same place, until I was on top of it!

Soon after, you reach Leyburn, so a right turn onto the a684 towards Bedale. This is a faster road and popular with bikers, though it has it’s own hidden surprises. I had a second ooo-errr moment here, a car stopped in the middle of the road chatting to cyclists on the other side. A nice run for the end of the ride out, before reaching the A1 and heading back.