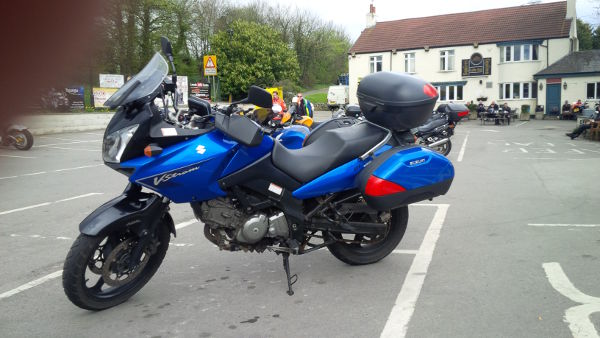 It has been a tough couple of months. After loosing my brother to cancer last year, my sister was rushed into hospital and prepped for surgery, the had a kidney en route and wouldn’t be 100% sure it was a match until they got it, but chances were good. It turned out to be a better match than I was, prompting me to ask mum and dad if I had a sibling I didn’t know about! Three operations later, things were touch and go for a while, things are looking positive.

In between all that, mum had been through a series of tests herself, diagnosed with cancer and started chemo.

My usual trip to my eldest daughters to visit her, my son in law and grand children (otherwise known as “the girls”) takes about three and a half hours of motorway driving. I decided we were going on the bike, and avoiding the boredom of multilane roads. We would take the A and B roads, cutting across country, riding some of the fabled best biking roads, taking a trip of the Humber Bridge and seeing a bit more of the British countryside.

We delayed departure so I could attend a meeting with mum’s oncology consultant, and as the day got close I kept a watchful eye on the weather. Sunshine and heavy showers were predicted. Weather forecasting must be a difficult job. More akin to an art form than a science. I have become something of an amateur forecaster, forgoing the diving rods, but devouring information from reputable sources.

Thick mist greeted me across the North Yorkshire moors, extending as far inland as Pickering. Scattered showers with the occasional bit of blue sky as we hurtled down country lanes across Lincolnshire. South of Lincoln, the ominous dark clouds ahead bore down, creating flash floods and dropping traffic down to less than 30 mph.

We stopped often, to stretch, drink tea and rest a little.

Seven hours after setting off, we arrived. Was it worth it. Hell yes. I slept like the dead and ache all over today. I now have a pin-lock visor and a new pair of boots that are actually waterproof on my shopping list. The ride was thoroughly enjoyable and I arrived here with a real sense of achievement.

A day off the bike today. Some quality time with the girls. And I will be taking a similar route home.

2 thoughts on “Its all about the journey, not the destination”