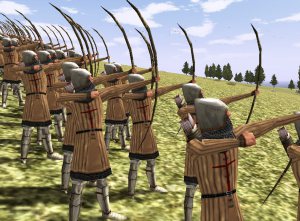 I recently sat and watched the new “Amazing Spiderman” movie. In my early teens I was an avid reader and collector of the Marvel comics and Spiderman was my all time favourite.

As I watched him swing from his webs, it reminded me a little of Tarzan and it occurred to me that it was a bit of a backward step in evolution. After all, if we descended from apes, then somewhere in our genes is that ability to swing from rope to tree, etc, though we have forgotten how and our modern lives no longer build up the required muscles.

What has this to do with the English Longbow, you may be thinking? Well, it is about building a set of muscles from an early age and maintaining them.

Back in the 12th century, the Welsh developed these Longbows that enabled them to kick English butts in battle. We adopted them as our own and for several centuries, until the invention of cannons, they made us almost unbeatable across Europe.

The longbow was a formidable weapon. It could pierce a knights armour plating from 200 yards. Previously the knights had been almost invincible to arrows, requiring hand to hand combat with other similarly dressed knights, slogging at each other with massive broadswords. And knights were noblemen, in comparative short supply.

There was a catch though. A Longbowman had to begin training at the age of 7 and continued practising, every day, for the rest of the lives. Only in this way, could they build up and maintain the required set of muscles in the arms and shoulders to give them the strength to draw the arrow back. The build of the muscles must have given them a lobsided appearance in normal life. And it wasn’t just brute strength either. To consider themselves a longbowman, they had to let loose 10 arrows per minute. Quite a feat. I would be able to draw the arrow back in the bow once!

The next time you see someone and they appear a little lob-sided, consider for a second, that perhaps their distant ancestors defended this little island from the rest of Europe.

8 thoughts on “The longbow and English supremacy on the battlefields”